Earlier this week a local Horizontal Directional Drilling (HDD) customer of our Largo, Florida store was on a very challenging project in Zephyrhills, Florida.  The HDPE pipe they were installing was not exceptionally large and the boring length was 600-feet so it was a typical project.  The challenge was the sticky, orange clay formation they were drilling through and the maximum hole depth was 25-feet below ground surface (BGS).  The driller called our store and then spoke with Mitch Davis, who works in outside sales and technical support for the company.

After a bit of discussion, the customer purchased a pail of EZ Mud Gold, a specialty clay inhibitor made by Baroid (IDP).  Atlantic Supply is an authorized stocking distributor for Baroid and most of the Atlantic Supply team has attended various Baroid mud schools.  Mitch has attended multiple mud schools and frequently helps our customers with product selection and usage and mixing instruction, all at no charge.  Baroid also employs regional drilling fluids engineers who are also available on-site at no charge for Baroid product users.

A few days after purchasing the polymer, the customer met Mitch at the jobsite and was instructed on both dosage amounts and mixing procedures.  The customer, who was already using a quality bentonite mud designed for HDD, started by adding a few pounds of Soda Ash to their mix water prior to adding the bentonite.  Most drillers know that adding Soda Ash will raise the water pH (between 8 and 9 is ideal) but another important function is lowering the hardness of the water.  As all Floridians know, our ground water is very hard (from calcium) and sea water is even worse.  The calcium will cause the bentonite platelets to ‘stick’ to each other as well as keeping any polymers from mixing (yielding) into the drilling fluid. 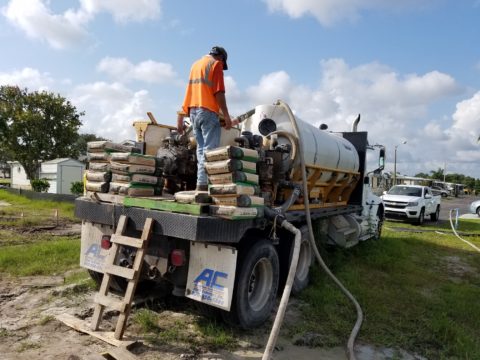 The driller and helpers were instructed to pre-treat the makeup water and then add three bags of the bentonite and mix thoroughly.  Once the bentonite was mixed, they were instructed to add three pounds of EZ Mud Gold polymer and again, mix thoroughly.  One of the most common mistakes made with drilling fluids is the lack of patience when mixing and adding polymers.  The extra bit of time spent mixing products so they disperse into the water pay off at the end of the day and the project.

In the case of adding a clay inhibitor, mixing the bentonite first is key since the clay polymer is designed to coat clay and keep it dry.  Bentonite IS clay and if it is not mixed properly, the clay polymer will coat it and lead to “fish eyes” or clumps of unmixed bentonite in the tank.  Simply put, if the mud looks bad in the tank, it will perform bad in the ground.

Since the borehole was 25-feet deep, the fluid was fighting gravity (and distance) to move the cuttings out.  In these cases, a suspension enhancer may be required, such as Baroid No-Sag.  This product adds “gel strength” to the fluid which means it will suspend the cuttings while the fluid is moving and at rest.  This keeps the cuttings from settling on the bottom of the hole while the pump is off (during drill rod changes).  Thankfully, the driller was using a high-quality bentonite specifically for HDD work (WyoBen brand ‘Tru-Bore’, also from Atlantic Supply) which contains polymers for gel strength, so no extra polymer was needed. 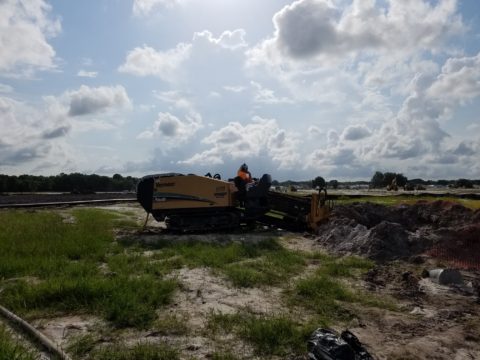 Once the fluids were mixed and in the borehole, the driller and crew could see a noticeable difference in the fluid in the exit pit.  One man remarked that it seemed to be ‘thin’.  In this and every other case, a thin, tough fluid does the job.  Many people feel that thick fluid is better but that is not the case, especially in HDD work.  Thick drilling fluid is not only a waste of product but it is tough on the mud pump and the rest of the fluid system.

After the adjustments to the fluid were done, the driller and crew were able to complete the project on time with minimal additional material cost.  The time that the contractor saved by using the right product and mixing it properly is far beyond the cost of the additional polymer.  And since the driller received first hand, on-site assistance, they can now use the knowledge gained on the next project.

If you would like to learn how we can improve your drilling fluids program, please contact your local Atlantic Supply store or send a message via our website.